Earlier this week, we were pleased to announce we’ve expanded our ongoing collaboration with Red Hat, pairing Kaloom’s Cloud Edge Fabric™ with Red Hat OpenShift to create a unified solution for emerging 5G edge cloud use cases. Since Kaloom’s inception, both companies have always collaborated very closely. The key reasons being that Kaloom never wanted to develop a traditional OS and, also, for us to leverage Red Hat’s strengths as much as possible. This enabled us to focus on our strategic differentiator - the networking applications that Kaloom writes – and leave the maintenance of its market-leading OS to Red Hat.

As Kaloom developed its Software Defined Fabric the relationship continued, with the development of an ML2 driver for Virtual Machine (VM) environments in the context of Red Hat OpenStack Platform integration, as well as a “Container Network Interface” (CNI) for the container-based Red Hat OpenShift integration. These two elements are key to provide unified support for both containers and VM-based workloads. Because the migration from VMs to containers is a long process for our customers, many run hybrid environments as they switch from VMs to containers.

Our CNI, named Kactus, is capable of dynamically discovering and adapting to changes in the networking environment during runtime, including support for multiple network interfaces per POD in the Red Hat OpenShift orchestration environment. As such, it solved several networking limitations in Kubernetes. Previously, Kubernetes only permitted discovery of the network topology at start time and each pod only had one network interface other than the loopback.

In addition, Kaloom developed the “Kaloom Virtual Switch” (KVS) to improve network performance to deliver dramatically higher throughput and lower latency for container networking by offloading the switching functions into the hardware (ASIC) for a better application experience via improved scalability and availability. Naturally, our CNI plugin connects to KVS, providing native IPv6 support, with the source code available on a GitHub.

Red Hat and Kaloom at the Edge

As indicated previously, since Kaloom’s beginnings Red Hat was always a key partner, providing the core infrastructure – what others would call the Network Operating System – that freed us up to work exclusively on our container-based networking solutions. Kaloom sees the switch as an improved network interface card (NIC) inside the server, focusing on fully virtualizing the data center fabric in the core where we provide a Software Defined Fabric via a leaf/spine architecture and/or at the edge with our Cloud Edge Fabric that is delivered within a mesh architecture. 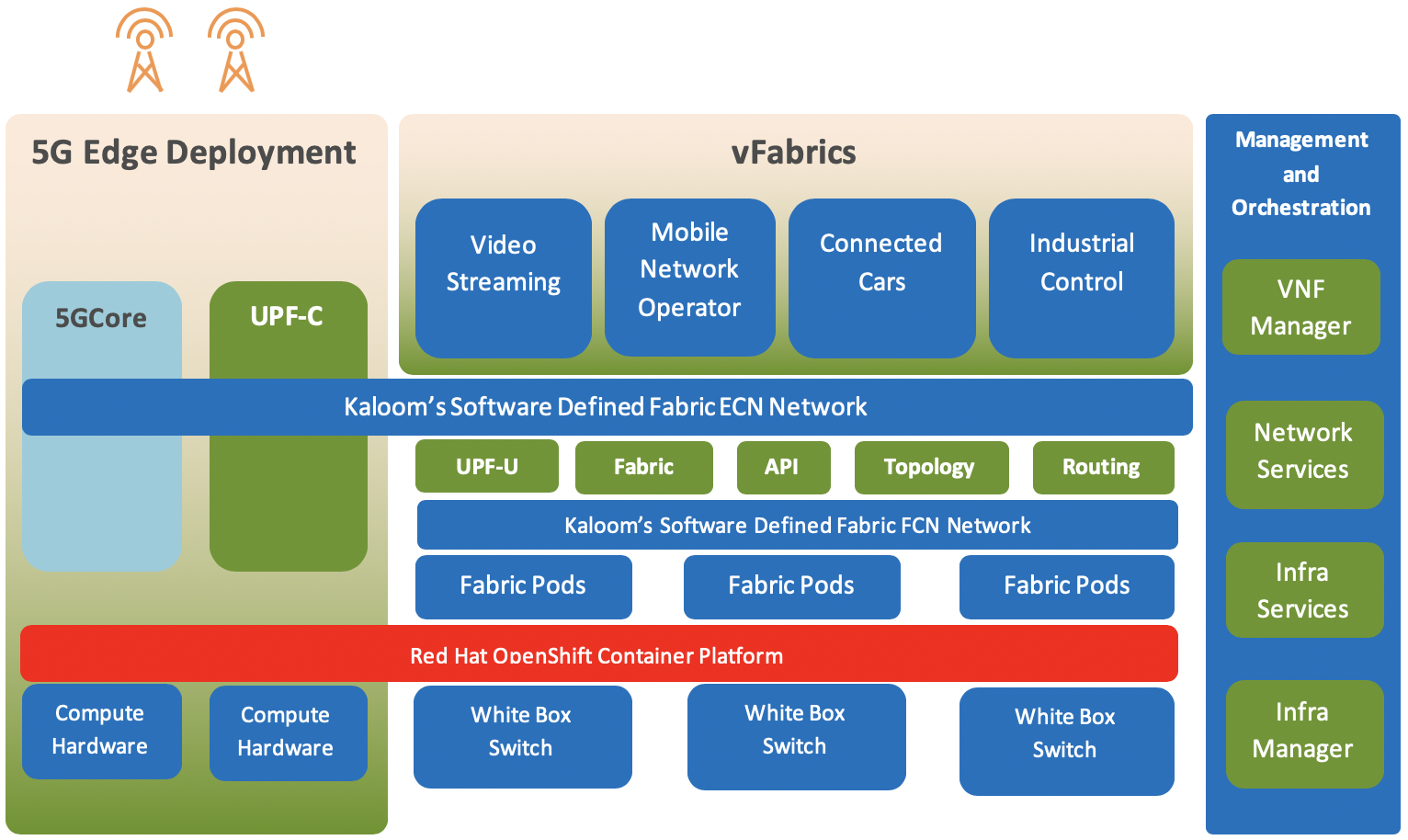 Service Providers are being pushed to edge computing as a solution for reducing latency and throughput problems while enhancing the user experience and driving efficiencies in day-to-day operations. Legacy networks and data center architectures will not be able to meet these new varied demands, requiring a fundamental shift for building the network edge, with an emphasis on supporting edge-native apps and delivering high performance at the lowest possible cost.

With its unified edge solution, Kaloom provides a combined and optimized platform that includes networking, mobile, and fixed access termination as well as an edge execution platform with an extremely small footprint. This allows operators to maximize their monetizable resources at the edge by approximately 200 percent compared to existing solutions while delivering a 10x TCO reduction. This truly enables Kaloom to disrupt today’s edge environment both technically and economically.